Using Anytype on a Chromebook

Hello, and thanks for this unique product! I’m excited to be involved in the alpha.

My daily driver is a Chromebook, and I use an iPhone. My ability to jump “all-in” with Anytype is challenged without a platform to use it on. When I try to launch the appimage in crostini (Chrome’s linux terminal), I get the following message:

(node:785) UnhandledPromiseRejectionWarning: Error: An object could not be cloned.

(Use anytype2 --trace-warnings ... to show where the warning was created)

(node:785) UnhandledPromiseRejectionWarning: Unhandled promise rejection. This error originated either by throwing inside of an async function without a catch block, or by rejecting a promise which was not handled with .catch(). To terminate the node process on unhandled promise rejection, use the CLI flag --unhandled-rejections=strict (see Command-line options | Node.js v17.0.1 Documentation). (rejection id: 1)

Has anyone been successful in getting this to work on a Chromebook? I’m testing using a Windows VM over the network using VNC, but that is less than ideal.

Hey! I’m not sure if I will be able to help you completely because I don’t own a chromebook, but I will try.

Can you provide the output of these two commands?

If vainfo didn’t give you the output or gave an error, you might have to install open-source drivers for according to your system.

Let me know!! After you got output of vainfo.

Thanks for the help!

lspci did not work - command not found

vainfo was not installed. I installed it and it provided the following:

Appears to be video driver related, but I can run most any Linux app on this machine, including things like Visual Studio Code, Vivaldi, NoMachine, and Remmina.

What’s your hardware specs? So, I can know what GPU you’re using.

If this didn’t work, try installing the dependencies of this manually… because I’m not sure if crostini supports unstable repo packages https://packages.debian.org/unstable/va-driver-all 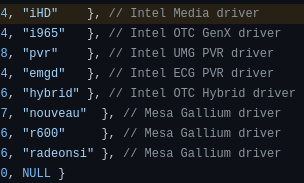 (Not Recommended, but you can try)

Let me know if any of this worked or not.

Here is the message when I try to manually install va-driver-all. It thinks that is is already installed, yet when I run vainfo it isn’t happy:

So, naturally the rest of the information you graciously provided ends in failure.

It has to be a crostini thing. It’s just weird that full graphical appimages work without any modification.

Doing some[ reddit surfing](https://www.reddit.com/r/Crostini/comments/er4uwc/libva_info_va_getdrivername_returns_1/), I found out that crostini only supports OpenGL at this time. It is using a virtual GPU. No hardware support yet. So, I will have to figure something else out until a Chromebook solution is developed. REALLY appreciate you leaning in to help… I may try Crossover today and see how that works.

Crostini has virtual GPU and only supports OpenGL for now (hopefully we will get Vulkan soon as well). Any hardware-specific APIs like VA-API and VDPAU are not available and unlikely will be supported at all.

But now that make sense, As crostini do have virgl https://virgil3d.github.io/ which simulates as Virtual GPU it basically uses the host GPU without passing it through. You can check it by runningglxinfo -B | grep Device:

Silly me thought this could work because I fixed a similar issue on my old laptop with defining to iHD in this commandexport LIBVA_DRIVER_NAME=iHD. Which had the similar errors of libva… though it wasn’t Chromebook like yours. So, that’s why it worked on mine… But I didn’t know virgl wasn’t supported… which now make sense Haha!

Also take a look at Official Chromium Docs for VA-API they can actually help you better than I can ever.

These links above should certainly help you.

The only option available I can think of right now is trying to run the “APK version of Anytype” by sideloading it which is fairly simple, you can google it for sure.

This is Might work, but you won’t feel a desktop experience of Anytype.

Thanks for all your input and ideas. I did load the Android version, but it is assuming phone display, so it is not as useful as the desktop. I’ll keep trying different combinations and report back here if I find anything.

Hey there. I’m wondering if anyone has found a fix for this yet? I have a Pixelbook (Chromebook) and I’m having issues getting Anytype installed on it.

I’ve tried the above methods, but nothing so far.

From what I can tell, we are out of luck until the developers can create a version that works in Crostini. At this point it is trying to directly access the chromebook video card and that simply doesn’t work inside the Linux container. The Android version is not designed for the tablet view. It has limited my ability to really dive in since the Chromebook is my daily driver.

What a shame. My Chromebook is also my daily driver as well. I have the android app on my phone, but it’s not the same as the desktop view and I wanted to get familiar with it on desktop before using it on the phone. I guess I’ll be waiting a while until they get it working on Chromebooks.

Google Play has version 0.6.0 as of Feb. 11th which installs and runs as an Android app on Chromebooks as well as phones.

@tomfowler could you try to install the latest Android version on you Chromebook as suggested by @cadsmithinc?

@SuperNinjaMonkey could you try to install the latest Android version on you Chromebook as suggested by @cadsmithinc?

I have installed the latest version from the Google Play store on my Chromebook. It is usable, but looks like a phone app. Is it aware of a tablet mode? It would be nice to use more than the center third of my screen. Thank you for your efforts in making this work. It took me a while to respond because I switched to a Macbook Air. Had to charge this Chromebook back up. I still sore about the Google Workspace thing and had been on a Google strike the past month.

@tomfowler thanks for your update. As you switched to a Mac, this might not be relevant for you anymore but it seems there is no feature request yet on making Anytype avaliable on a Chromebook (or a tablet sized device). You could create on if this is still of interest to you.

@SuperNinjaMonkey idem for you: if this is still of interest to you, feel free to create a feature request

Marking as solved for now as there is no response. We can pick this issue up anytime we get more information about the issue(s) on a chromebook.