Not really a problem. I just think that for aesthetics in some cases this would be a great feature and have found myself wishing it existed quite a few times

I’d love the ability to create a vertical line divider (much like the vertical ones). I imagine that as a block this would work pretty much the same as any other text block and would make use of the column structuring ability (it would get its own column and just be a small one).

Add any other context or screenshots about the feature request here.

@bskinner thank you for sharing your opinion! Can you please describe how you want to use it, some references of this block (if possible)?

Also, it seems related to the simple table feature, am i right?

I don’t know about @bskinner, but for me its mostly a desire to split up columns visually, like the horizontal lines do currently. I took a screenshot in Anytype where I was highlighting the block, so that a line showed up. Essentially, I wish I could make this line permanent, but as of now its a temporary line to adjust the size of a column. 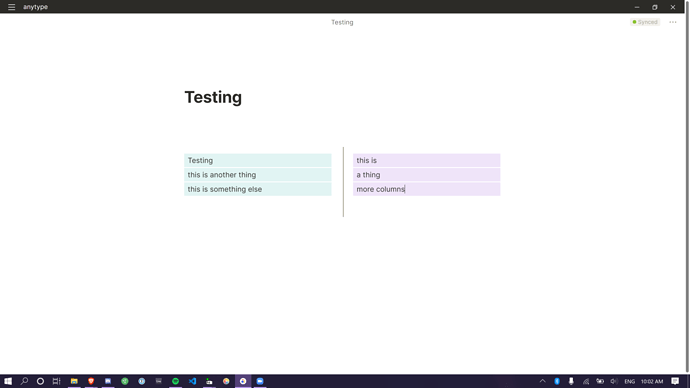 Totally agree with @laurara here. I see it as acting differently to a ‘table’ in the sense that a table would likely be more of a structured object in my opinion. This would be a much more flexible tool which would only actually provide an aesthetic function and not a structural one (as I imagine a column divider in a table would). As mentioned by @laurara it would basically be the same as the line you see when hovering, but would just be an object in it’s own right and would be able to be moved around like other text styles. This isn’t anything urgent, but it would certainly help my pages look more how I want them to look and allow me to break up sections of text much more easily!

@laurara @bskinner thank you for providing so comprehensive details!

It feels more like the page styling (or app styling) setting rather than a special block.

Do you want to see separators between each column in the Anytype, or in certain cases?

@vova_ermolaev I would like this to only be something which would be there in certain cases. I see it working very similar to the horizontal line dividers. These would be an inline object which could be placed where required. I think that in my head, they would be created like a horizontal line divider is currently and could then be moved to be next to any object(s) like how we can do with other text styles currently. Once in place it would just show as a vertical line the size of the ‘block’ of object that it has been set to go next to. Hoping this all makes sense! Have a vivid idea in my head but struggling to put it into words.

@vova_ermolaev to add to (and agree with) @bskinner 's comment, I am thinking of an object that is its own block, and is not always enabled (although that is a very interesting idea, toggling block borders on/off). The way that I sort of crudely envision an implementation it is a thin column of blocks that take up the region between two columns and have a line centered on this thin column that is connected vertically from one block to another (I’m not sure how clear that is).

I think the important functionalities are the flexibility to move it around the page and the fact that these exist independently of the page as a whole. But I think that generally this is a visual/aesthetic feature rather than a highly functional component (other than the user’s visual/perceptual experience).