Not specifically, but I would like the feature to be added in the future.

Support for handwritten notes (mainly with apple pencil but also using a regular cursor or touch screen). Just like onenote.

Add any other context or screenshots about the feature request here.

This will be a great! With OCR searchable text

And as an option, it can stay as the written form or converted to text (which iPadOS already supports)

How is it going to work on a line based app? If what you are talking about is simply writing whatever you wanted to type, then keyboards can do that, they can convert your handwriting to characters.

@BGray great questions and things to think about.

Maybe for a start, there could be a simple free-form text / drawing module that stores it as an image/vector data. And with OCR, the handwritten text searchable thru the search module.

From the Anytype interface, it can be treated like a block and can be resized to fit or linked.

This will probably be further down the journey I reckon after the endless list of other feature requests come around.

@th- Thats exactly what i thought. There could be a block called "/note"or “/handwriten” or whatever name there is, that at first takes the hole width of the page and when you finish writing it is displayed as an image with all the current options for images. I can think of a lot more options and combinations but since I don’t know much about programming I don’t know how hard this would be to implement. Either way this would be an awesome adition.

To me this really seems like a need that should be filled with a plugin and not done by Anytype core. It just seems too far out of scope, of interest to some portion of users, but overall not a larger proportion of their userbase. And a lot of work to support it well at the same time = a bad case for being in core IMO.

@Oshyan I agree. Though I must add that they should really consider making a plugin for handwriting as Anytype will need something more than just privacy&open-source for people to switch from Notion and alike. Only a small portion of the people using such apps care about their privacy and they don’t mind if it’s not a FOSS. An extensive plugin library might indeed be enough for a lot of people to switch to Anytype.

@BGray 1000+ people in a Telegram group with near-daily “is it available yet?” is a pretty good sign though given minimal marketing to-date.

And honestly, unless Notion is suddenly able to release much faster after the API is out, Anytype’s dev pace could be enough to set them apart. Notion is glacial by comparison and has been for over a year.

There is also claim that they have a unique take on databases, which I’m eager to hear more about…

@Oshyan If that is the case, then it would make sense to leave the development of such plugin to users interested in handwriting support. Even in the case of them handling it themselves, it is not urgent.

@BGray We will make the base for plugins and I hope someone will lead and ship this feature in the future!

May I add my support for https://www.diagrams.net/?

I think that can be included without license issues.

Also I would like to add that Xournal++ is a FOSS app that supports pen notes, so maybe it’s not that difficult to integrate part of their software into Anytype (or a plugin). I’m not an expert though, just sharing thoughts

I just want to add - if pen support is ever released (which would be an incredible feature in my opinion), please make it universal, and not only for apple pen users. Surface and graphic tablets should be able to write too. (I’ve seen other apps launch this only for iPad)

I’ve just purchased a new iPad, and I’ve been taking handwritten notes, when appropriate, in GoodNotes and importing the PDF into Anytype after finalization. It’s a testament to the value and importance that Anytype already has to me, despite being in alpha!

I just wanted to provide some of my input to how I believe pen input can be implemented into a notetaking app that is primarily text-based - ala Anytype.

Many note-taking applications that support inking/handwriting were often built from the ground-up in order to take advantage of pen input and make it a first-class citizen. Examples of this can be seen in applications like OneNote, GoodNotes 5, Samsung Notes (the version built for the Note line of devices) and Notability. Here, I’m pretty confident all these apps are free-form, where different elements (ink, images, etc) can overlap each other. For example, this means that we should be able to write some text, then annotate over the text using the pen. 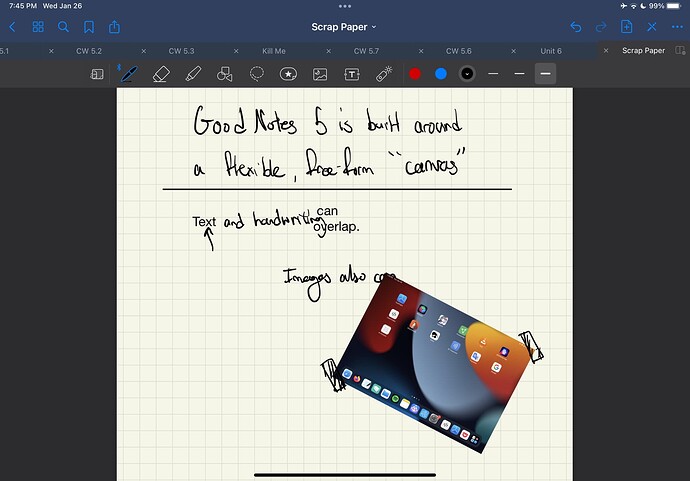 Unfortunately, a free-form type of note app, where we can just write over the text won’t work for Anytype. Although it would be amazing to be able to just take an Apple Pencil and start annotating all over the text in the Object Canvas, it would be incredibly complicated to build on Anytype’s current architecture and difficult to create, especially considering that we need to scale the software from small phones to large desktops.

So, how do I believe Anytype should integrate pen input? Prior to the release of the Apple Pencil, the default Apple Notes app only supported text input, meaning that it wasn’t built from the ground-up to be inking-first - just like Anytype. It’s also not free-form, like Anytype as well.

Apple Notes, being an application which was initially built solely around text input, handles both text input and pen drawings by separating these two horizontally. You can’t type on the drawing, nor can you draw on the typed text. If a user wants to add more drawings, the Apple Notes app automatically creates a new drawing “block” seamlessly. If the existing drawing is expanded upon, the drawing “block” is expanded automatically. 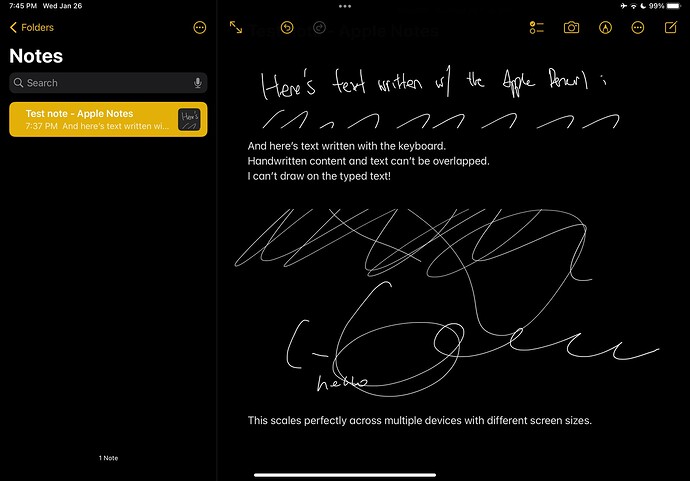 This ensures that the note can be used across multiple devices with varying screen sizes seamlessly, as we only have to downscale the drawings, not the entire “canvas”, like in GoodNotes.

In Anytype, we could create a new dedicated “Drawing” or “Ink” block type that will be automatically created when the tip of the pen touches the screen.

(I apologize if this has already reiterated things that have already been said, or are obvious; I just wanted to offer my own concept and an analysis into how other apps implement pen input).

Even search text from image is needed.

Lack of this feature is the only reason I’m still using GoodNotes over Anytype. Whenever I note down todos and ideas in meetings, I then need to manually aggregate them afterwards.

I’m planning on replacing my old iPad with a newer one and also want to get a pencil for mindmaps, ideas, diagrams and that kind of notes.

It would be huge to integrate those things to all the other notes and documenation I want to store in Anytype.

) as an editor block type like “/drawing” that is only available on the tablet and on Desktop its just displayed as an image.

I agree, writing on pages with other elements can be implemented later but at early stages a blank page with image and handwriting support would be awesome.

Not sure if this should be tracked in one topic or not.

@Oshyan Yeah look like the main idea is the same. You can merge them, if you want.