Currently, Notion embeds them by /embed and linking it with Playlist or Song URL’s. For Private playlist, they have to sign in the browser first in order to show up.

So something like this in Anytype would be much cooler. Because right now, Anytype only supports Bookmark link embeds. 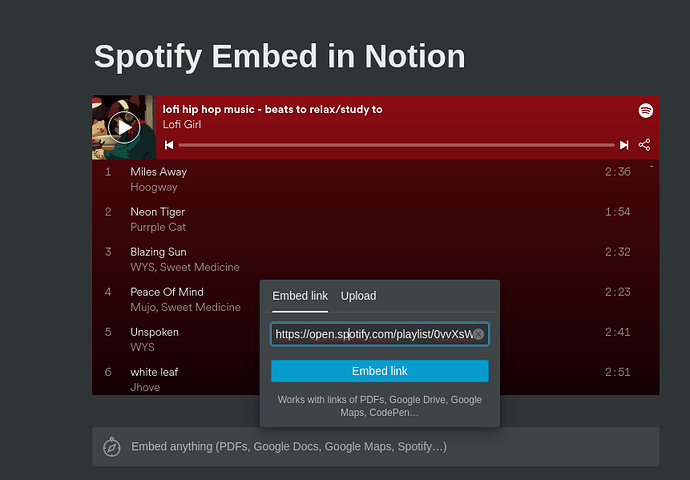 This would probably good to have as a plugin in my opinion. Notion does not have plugin capabilities and so people hacked around the embed option within notion to feature dynamic widgets ( webpage embeds ) within their pages. But since anytype is planning to have a plugin system, everything that is possible with notion and more integration with 3rd party softwares can be made independently as a plugin by the community

I don’t think there is need to hack around for this… because Spotify supports them natively and these are Just &lt;iframe&gt; widgets. https://developer.spotify.com/documentation/widgets/generate/embed/ which are used in Websites.

Also, If you notice the song and playlist embed is also possible on Discord too, like Notion… Because they are electron web based apps, and might be easier to embed “iframe widgets”?Idk So I thought, As Anytype is electron based… It would support them too with little tweaking. Right? No need for plugin in this case. It should support natively.

I would love too see this in Anytype because I use this feature all time in Notion. It saves my time to open Spotify and play it from there!

@Sedulous what i’m trying to convey is that anytype already has a native way of playing audio files and has a separate media type as well which notion lacks. So instead of trying to support the same multiple times it would be best to have the spotify support as a plugin which can make use of the several APIs from spotify to bring the whole experience of spotify to anytype. i.e, search songs, artists, albums etc. which is much useful than the simple widget that spotify provides.

However I like the idea of having iFrame embed support within anytype. I just feel that spotify as a whole can be made as a pretty useful plugin without getting limited by the functionalities provided by their iframe widget

Hmm, that would work too… but Plugin is long development wait and depends on users contributions. So there is no guarantee if that will available anytime soon.