Is your feature request related to a problem? Please describe.
I’ve been using Anytype as a way to keep notes on my worldbuilding recently, and there are situations where two objects have an asymmetrical relationship between them. e.g. Person A is Person B’s father, Person B is Person A’s daughter. I set the objects to each have a separate Object relationship (one named Father, one named Daughter), like so:
Person A — Daughter —> Person B
Person B — Father —> Person A
However, only one of these labels shows up in graph view: 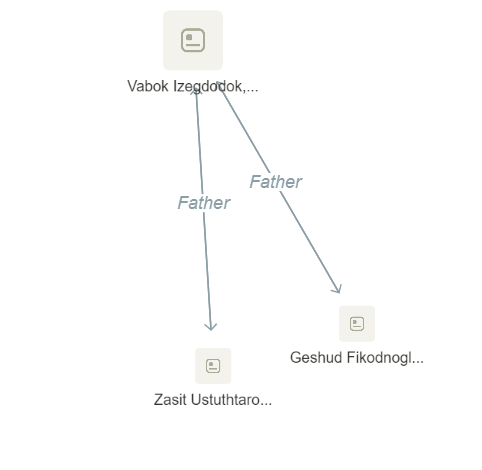 Describe the solution you’d like
It would be great if, when two objects have multiple different relationships between each other, it would show them all in graph view. So you’d have an arrow pointing from Vabok to Zasit saying “Daughter” and a separate arrow from Zasit to Vabok saying “Father”. I do however admit that this might get very messy if you have many relationships between the same two objects.

The links are actually available but overlapped. Kindly check this issue

Describe the bug Bi-directional links between nodes in the Graph view is getting overlapped and not displayed as two independent links To Reproduce Steps to reproduce the behavior: Create different objects with relations linking to each other Open graph view Expected behavior Instead of overlapping, each relation should be spaced out and displayed separately System Information: OS: Linux Anytype Version: 20.2 Additional context There are two relations named Books Written and …

Even in the image you’ve shared, you can check that both ends of the relation link has an arrow indicating that the objects have bidirectional relation

I might edit this to be specifically about asymmetrical relations then - do you think that would be a useful feature over and above simply having two separate relationships going from A->B and B->A? It may be an unnecessary feature, to be honest, I’d appreciate input to see if anyone wants it