@Oshyan In your concept would the tree have to be created and maintained manually by the user?

@Oshyan If yes, what would happen to the auto-generation process if a user edits it?

In the case they want to make it autogenerated AND user-editable, then a confict resolution algorithm will need to be empoyed

Btw I was thinking about the fact that it could be a plugin rather than part of the core AnyType, if plugins will ever be supported.

@Pandry Plugins are definitely planned. And what you’re describing does sound more like that to me. Although I have also suggested a general “Sidebar” that might basically do what you’re wanting, if you pinned your own page with self-created “tree” of links in it:

I completely agree with @Oshyan - the current layout makes it hard to maintain good page hierarchies. I too get “lost” in anytype quite often as @Liam mentioned.

Apart from navigation, I feel that this tree sort of structure might aid itself to any easy way of organization. It could be simple folder based organization or some sort of hierarchies or maybe meta pages with subpages (like notion), but I am not really clear about exactly one should go about it. However, it is clear that it is becoming harder to navigate through and reorganize pages as the number of pages grow.

Given the rather high growth rate of pages in Anytype, thanks to its speed and the usability, I feel that an easier way of navigation and organization is required.

I agree with this, maybe it’s just that i’m so used to this idea of navigating. But i get lost in the ui so much right now too. I think most users are more comfortable with the idea of a sidebar tree navigation and may get overwhelmed by the current ui.

@fillwe @Oshyan I agree too. Current idea for Home Screen UI is kinda okay and overwhelming. I like the traditional tree view too(Just Like how Notion has). On top of that, they should give us the ability to pin a SPECIFIC page like “Home” or “Dashboard” or something like that, which opens by default when Anytype launches/restarts.

This would make a huge IMPROVEMENT in the whole UI.

I think it would be better to add a “graphic” display. When an object is clicked, its associated parents and children are highlighted, so that we can know the impact of the operation (such as “Delete”).

Not to keep going back to “clone notion” but Notion implements this really well. I think we need something else other than a view of objects->objects, even if a graph is used, there’s so many circumstances where normal trees are so useful, such as separating projects. 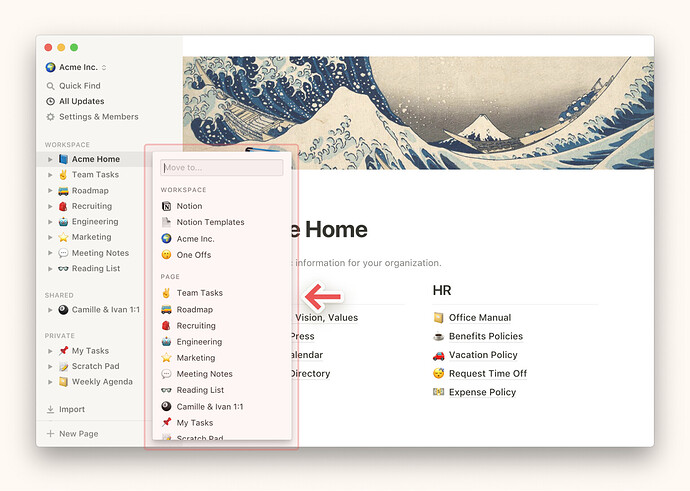 Though ideally I’d prefer to also have the option to create my own sidebar. It could simply be an Object, with all the links I want, including separators and any other arbitrary text/content.

@qualquertipo I’m pretty sure this kind of desire would be met with a “page sidebar”, as described here:

Cool. I commented there. I like the idea, but I think multiple panels would be even better.

Anyway, what I mean by sidebar is slightly different than what I call panes.

Panes would contain different content, opened and closed as I need them, with the configuration changing as I move from task to task, or project to project. Meanwhile the navigation sidebar would always have the same content, and be accessible in the same way/place. For example, tucked on the left, showing on hover.

Here’s the kind of sidebar I’d like to have. This is not supposed to be pixel-perfect! Just a quick mock-up to illustrate what I mean.

As I mentioned, I’d like the actual content of that sidebar to be something the user can define themselves. For example: in the image below, Countries can be expanded, but Timeline can’t - this doesn’t necessarily mean Timeline doesn’t have children. Of course, casual users can just pick from some pre-defined templates, such as a tree navigation automatically generated from certain rules.

I also moved the + and ? icons into the sidebar, and a link to the Profile on top. Anything could be in there really. Forgot to add an icon to pin/unpin it.

Btw, I haven’t seen any mock-ups in the forums yet, so please let me know if this isn’t something that I should post here!. 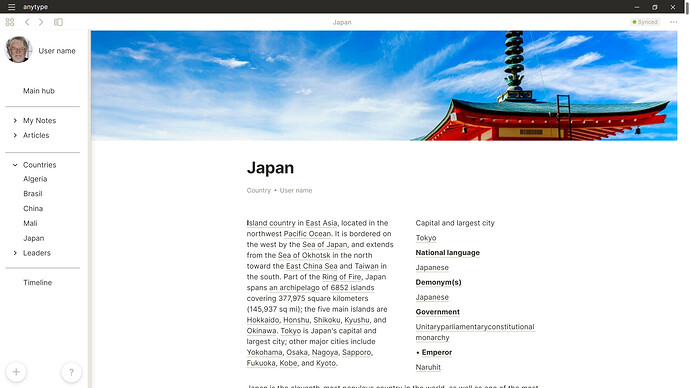 Folded (to open, hover the thin tab on the left): 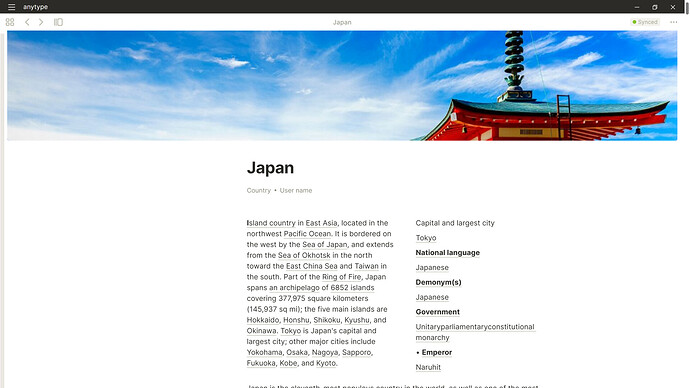 Here’s the kind of sidebar I’d like to have. This is not supposed to be pixel-perfect! Just a quick mock-up to illustrate what I mean.

I’ll wait for the update that supposedly include it before making a mockup myself, but I must admit that yours is quite good!

Am I wrong or is it now planned under the “Sidebar with navigation” as indicated in the roadmap?

I believe that is correct.

Using Notion, I don’t like sidebar. I have a very plain structure, so I’m having to scroll a lot to find a parent page. So +1 for breadcrumbs (or maybe even a separate feature request should be made?)

In general it seems that many people like the idea of tree navigation. It is quite common, and Notion seems to do well with it. I understand you personally do not like it. But if you prefer breadcrumb nav of some kind, I do think that would be a separate feature request. Do a search for related requests first (I have not done so), and if you find nothing, please do make a request describing your ideal feature for breadcrumb nav.

We are going to release it next week

@Oshyan Would you see this request as completed with the new sidebar?

Maybe keep it for the other related requests, such as the one below?

To me, as much as I’m excited about the sidebar, it won’t be useful for me until I can customize it…

@Oshyan +1 Though ideally I’d prefer to also have the option to create my own sidebar. It could simply be an Object, with all the links I want, including separators and any other arbitrary text/content.

Would you see this request as completed with the new sidebar?

More or less, yes I think so. I believe there are now new feature requests that could apply to the existing sidebar, for example a way to view all objects in the sidebar (like you can in Notion, for example). But since we already have a sidebar, the core feature request here seems addressed. That said, read on…

Maybe keep it for the other related requests, such as the one below?

To me, as much as I’m excited about the sidebar, it won’t be useful for me until I can customize it…

I think this would ideally be a separate feature request, and would hopefully be well described so as to reference the current/existing features/functionality that we now have with the sidebar as-implemented, and then suggesting either specific changes to it, or perhaps suggesting an entirely alternate (additional?) type of sidebar navigation helper. In other words I think further discussion of such customization needs to keep in mind that the current implementation of the sidebar would very likely not be extendible to “just a page that can be fully customized” as some previously (more or less) suggested. So either there needs to be a concept of customization that fits into the existing model (collapsible sections, basic parentage/hierarchy), or the suggestion needs to take into account that it is suggesting some entirely additional type of UI feature.

With all that in mind, I think perhaps someone would ideally take on the job of describing a new feature request for customization, and then the discussion relating to customization could be merged into that new request (unless there is an existing reply above that seems like a good candidate to anchor a whole new topic on a customizable sidebar feature).

I would also suggest that any new feature request around this needs to specifically address why the existing Favorites functionality is not customizable enough for their needs. I.e. what exactly they want to be able to do that is not possible with the current options.