Nesting Objects/Sets inside each other

I’d like to be able to nest Objects and Sets inside any Object.

Note this is not in contradiction with the idea of having a non-hierarchical data structure.

Any unit of content should/could still be cross-referenceable and [transcludedable](https://community.anytype.io/d/875-transclusion-aka-portals-to-other-objects-blocks-etc) individually.

The only difference is that users would be able to pick a structure where each unit of content would “live” (which could be used as a tree structure in their [sidebar](Please add traditional "tree" for navigating page structure)).

In practice, this would be as if Objects and Sets would exist as Blocks within an Object (somewhat like Relations currently are). Note how this would essentially mean that [everything is a “block”](Everything is a... Block?) (or any other name).

16 Likes
How about supporting inline any "Type" object but not only "Set"
Tag any branch of that tagged page
A way to add/organize content in a way that is less rigid, more organic and frictionless (like RemNote)
Option to have rows in Sets be nested (and foldable) based on page hierarchy
Everything is a... Block?
Allow inline reference in object name
Desire for super block function
Search by tag. Marking on a text fragment
lynxlove September 3, 2021, 4:22pm #2

@lynxlove Nested Set is part of it, yes!.But my FR is about a broader concept.

Also, I think “inline” has a different meaning than what is being said there. As far as I know, “inline” means when something appears as if it’s part of the flow of the text itself (within a line).

A Set can’t be “inline”. It can be nested inside an Object (or Block), as a new Block. But not within a line of text.

If this is a separate feature request from “everything is a block” then it seems essentially to be a duplicate of “In-line sets”. The terminology is a bit vague, open to interpretation. “In-line” in this context simple means “interleaved with other contents that is not part of the set”.

If you agree I’ll merge this request over to the existing In-line sets request.

@Oshyan Thanks for looking into this.

Yes, this FR is very similar to my “Everything is a Block” post. But since I presented that as a question, and combined it with a broader structural change suggestion, someone changed it from a FR to a Discussion. I also made the mistake of mixing 2 suggestions in 1 post. So I created this more specific FR, focusing on the nesting feature.

Let me know if this makes sense. Otherwise I can try explaining it some other way!

Fair enough, we can leave it separate for now.

Just to add a visual example of how this is done in RemNote, for those who don’t use that software.

I can create this structure:

And if I “go into” one of these Rems, it’s essentially the same as going into a new “Page” having that Rem as title (or Name, in Anytype terminology): 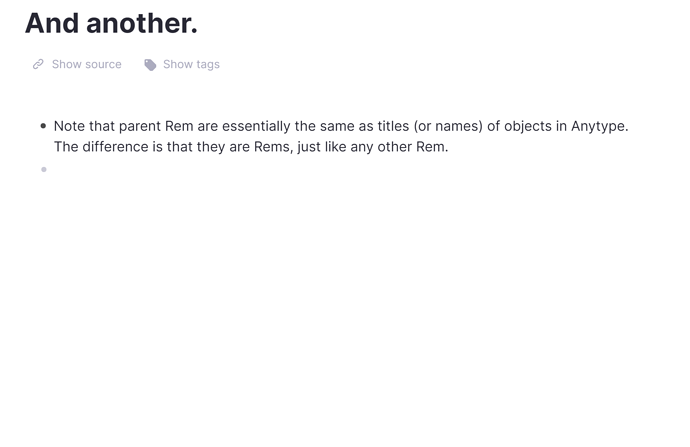 @Oshyan I don’t seem to be able to edit the title of my post.
Could you please do it to include the word “Outliner” there?
Maybe: “Outliner features: such as nesting Object inside each other”

I saw a mention about outlining in Telegram and thought would be good to have a main post here for it.

Or I can create a new one if you prefer. I thought of using this one to avoid more clutter.

Sorry for the delayed reply, best to just flag things for general moderator/admin notice (flag button) in the future, that way any staff member will see it.

I suppose the key question is whether your original request here is really about “outlining”, specifically. The way I read the original request felt related bit a bit more broad and powerful. To me an “outliner” is a pretty specific and simple concept, but it gets conflated or mixed with some other related but not necessarily intrinsically dependent concepts, such as transclusion. Think of a classic outliner like Dynalist and perhaps you see what I would have in mind.

I think making a definition of what a “basic outliner” would be, in a separate feature request, is probably useful. While this one can exist to contemplate the broader case of “nesting”, i.e. object parentage. They would be complementary functionality but not necessarily dependent on each other for implementation.

Sorry for the delayed reply, best to just flag things for general moderator/admin notice (flag button) in the future, that way any staff member will see it.

Did not know about this!

I think making a definition of what a “basic outliner” would be, in a separate feature request, is probably useful. While this one can exist to contemplate the broader case of “nesting”, i.e. object parentage. They would be complementary functionality but not necessarily dependent on each other for implementation.

Got it. Agree! Thanks

@qualquertipo did you in the end post a separate FR for the outlining request? If not, could we recap in the original post what the request is exactly about?

I don’t think so. From what I recall, I think I just suggested adding the word “Outliner” due to the lack of a better post related to that. But, as Oshyan mentioned, my FR is more specific.

Feel free to write one!

Any updates on this specific features request?

Just jumping in to say that this would be such a game changer. Use case would be: I keep track of tasks for several companies/projects as I’m a project manager. So ideally, I’d like to be able to nest a set inside a company page where I can show the list of tasks and projects and be able to sort them either as a List, Board, Gallery, or Table (just like a normal Set). Is this something doable?

No release date yet, though

Inline sets is highly requested feature. We are refactoring our data layer to make it possible currently.
About more broader concept - definitely love it and we have similar ideas, its just too hard to implement in a current state of product, but we looking to implement it in the future

This thread is long and full of ideas, what exactly do you refer to here?

Ability to create object from any text block. This rem reference you wrote about

In this post there is a video showing how that works in RemNote.

A way to add/organize content in a way that is less rigid, more organic and frictionless (like RemNote) Feature Requests

WHAT DO YOU RECOMMEND A more freeform/intuitive way to build my knowledge base by being able to easily/quickly nest/rearrange “Objects” around as needed. Structures and categories emerge naturally, and can be changed/improved with no friction. The short video below is an example of how this can be done in RemNote. Some notes: In RemNote, each bullet (which they call Rem) is the equivalent to an Object in Anytype. They can be nested, but also opened as a “page” on their own (as I show toward…

Not sure how something like this could be achieved in Anytype.

@ignatovv mentioned ability to “create object from a text block”. Note my proposal/request is something quite different. I’d like all blocks to be Objects (ie. more granularity).