I’m always frustrated when […] I select a block, and can’t move him without taking the mouse, would like to be able to to with the keyboard.

CTRL+ARROW UP → moves selected blocks one step up in document

CTRL+ARROW DOWN → moves selected blocks one step down in document

especially up and down would be very nice

We have such a shortcut for half of cases at least. Please, try CTRL+Shift+UP/DOWN

Is it possible to move block trees up and down in the same level, or depth (ie. without nesting them in other trees)? 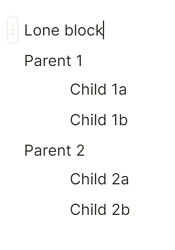 If the cursor is on the Lone block, I’d expect CTRL+SHIFT+DOWN to move it down between Parent 1 and Parent 2 (ie. it would appear above Parent 2), and at the same level/depth as them.

If the cursor is on Parent 2, I’d expect CTRL+SHIFT+UP to move it on top of Parent 1

The current behaviour (nesting) is useful, but I’d use it much less than the same-level movement I describe above…

I did another post about this awhile ago (I think at the time the behaviour I describe did happen in certain cases, which is why I say it’s “inconsistent”):

When outlining I like to move blocks around a lot, usually without leaving the keyboard (using CTRL+SHIFT UP/DOWN). Most of the time this works as intended. However in some situations it doesn’t when the blocks are nested. Consider this simple structure: [image] If I have the cursor on the “Lone block” and do CTRL+SHIFT+Down, it correctly moves it between the two parents below: [image] However trying to move it up immediately after this brings it inside the parent on top (and places it se…

It would be great to be able to select multiple blocks with the keyboard and also being able to move them arround like in Notion.