Describe the bug
Missing information in all existing grids
Columns are no longer populated with field values, only the name of an object is displayed. This is also true for a new grid i just created.

All images in all objects show “image is broken”

This is the worst ;-( … i will loose all my screenshots … i know there is always a risk using alpha software and i don’t blame anybody.

To Reproduce
Steps to reproduce the behavior:
Open updated Anytype

@mkoechli Thanks for reporting! Just wanna say that your files and sets are safe. This is just a bug in the indexing system. Already fixed and should be released within 1.5 hours

How can I use an older version?

Solved it by changing the URL on https://download.anytype.io/

Unfortunately, we can’t reproduce the problem with broken images on any desktop version from 0.22.1 to 0.22.3

@Ryan @lynxlove let me know if you can help to debug this issue on yours side. You can write me on telegram or discord @requilence

DM’d you on telegram

yeah after updating to 0.22.3 I am facing the image link broken issue 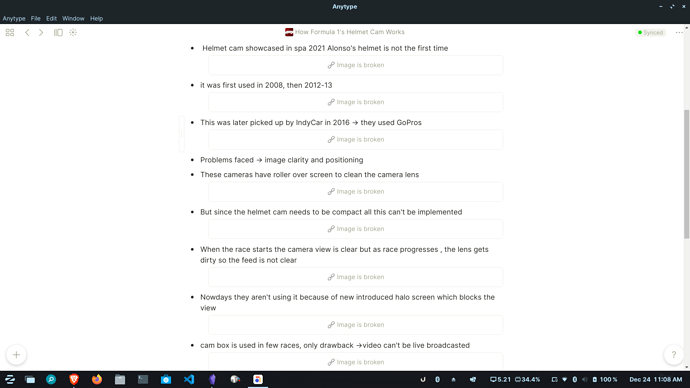 Facing the same issue on the android app v0.5.0.The images are loading on v0.4.4 though.

Also facing the same issue. Curiously, one installation of Anytype I have on my phone that migrated from 0.4.4 to 0.5.0 loads images properly (after some waiting), but the other installation that had its data cleared on 0.5.0 fails to load images at all.

This still appears to be an issue on macOS intel version 0.23, none of the images are loading.
Also an issue on the linux client.
I tried clearing the cache and still no luck. It does seem to work on my Android device.

When I go to older pages(days-weeks ago) and look at the images, it says for all the images in the page that the “image is broken”. Are all my pictures permanently gone? I am on the latest anytype build on a linux system.

they are not permanently gone. They are all on your machine but failed to be indexed due to a bug. We have reproduced this issue and fixed this bug. The fix will be available in the upcoming release in the next hours Anytype Desktop 0.23.5

Anytype Desktop 0.23.5 (Windows) fixed it partially for me. Some of the image is broken errors have disappeared, but it’s still showing for older images.

Do you have this on your list already? Thanks in advance.

yes for some of my page the imge link is still broken !

Did you try a clean sync after the update? If not, can you try once?
I had this issue after update in the android app for few images but clean sync solved it for me

what do you mean by clean sync ?

yeah i have did that two times

Okay this is weird. After updating the app, all my images worked on the linux app. Updated Android app to the latest version and it solved the issue on android as well. However, I just tried a fresh install of anytype on a windows machine and 5 of my images are still broken but all of them are available in the android version. I’m going to reupload them but I want to let you know that there still seems to be an issue

This still did not restore one of my 5 image blocks having the issue, but I reuploaded it