Here’s something interesting I ran across today, an app called “Craft”. It’s a more pure document type of tool, but block-based similar to Anytype, Notion, etc. What I want to point out specifically is the sidebar as shown at the time in the video linked below: 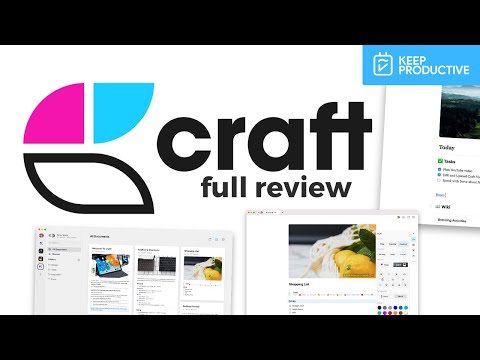 I like that the sidebar can be persistent and “minified” very nicely. It has some similar functionality to Notion’s “ellipses” or “3 dots” menu, which is another good example. What I like in Craft are some of the options, like disabling the cover entirely. But also on top of page-level functions, it has several different areas in its sidebar tool set, including one to add blocks with a drag-and-drop.

Benefits of a Blocks Sidebar Option

Now Anytype is already fairly fast to add blocks linearly, I’ll admit. But it could be even faster, especially for laying out more complex multi-column pages. Not only do you save the step of selecting the block type after creating it (because you are dragging it from a palette showing available blocks), but you can also create e.g. blocks next to others more quickly and easily, rather than create-below-select-type-drag-to-desired-location. Simply click desired block, drag and drop at desired location.

I wouldn’t want this to replace existing block add functions, but it could be a nice complement, along with other potential advantages of a multi-purpose sidebar like this. Of course it would need to be harmonized with the idea of a page sidebar, as I suggested here:

I use Roam and Roam-like tools (e.g. Logseq, Obsidian) and one feature they have that I really love and miss when using many other tools (like Notion) is the “sidebar”. What this lets you do is open one or more additional pages alongside a current, “main” one. You typically just hold Shift and click a page link and it opens on the right, rather than in the main content. Here’s a screenshot, although I’m sure most people are familiar with it by now: [image] The way I imagine this working in Any…

Some of these are potentially minor improvements, but I think there is a lot of overall utility in this kind of sidebar. And as I’ll be mentioning in another post in a moment, I think Anytype has a real chance to not just equal but differentiate itself from competitors like Notion by being more thoughtful and sophisticated in the way it lets people interact. Save some hassle here and there, and the tool as a whole ultimately becomes much more enjoyable to work with. And that can translate into more long-term adoption vs. competitors.

One of the awesome things of adding a sidebar like that is that you can add all kind of functionality to it. Add different tabs for backlinks, table of content, page properties, version history and more. Would love to see that in the future!

This is one of the features I love from Obsidian.

@Jeroen Indeed! I sort of proposed the sidebar with one particular use case, but it absolutely has many other potential uses. I for one would like to see Anytype move away from an enforced “minimalist” UI and toward a more configurable, dynamic one with the possibility to expose a lot more information and functionality optionally, without having to click anything or change focus from your content. For example I want to be able to have a sidebar open, “pinned” (or just have it stay open until I close it manually), then visit a page and, rather than having to up to the top page info/search to click and find backlinks, instead it just already shows backlinks on the right side. Save a lot of clicks in the long run. And if it’s made optional (e.g. slide-in/out and/or pinnable), then you get the best of both worlds: clean UI and writing-focused interface for those who want that, and ability to surface a lot of info for those who prefer that approach.

I really like the idea, especially if it has tabs and customizable options like in the video you showed.

Some other nice ideas for a sidebar in this thread:

Craft does something similar to this for right sidebar too.And the Dashboard by default in sidebar is nice Popup would be okay if the relations are small.

I was thinking today it would be nice to be able to pull a list of the shortcuts onto a sidebar while I’m learning or possibly the list of relations, basically information that may not pertain to the page itself.