It would be great to pick Android styled emojis rather than the iOS ones. Or you could make this an opt in option so it’s up to the end user.

Android 12 emojis present in Pixels, not Samsung emojis (or add that as an option too idk) 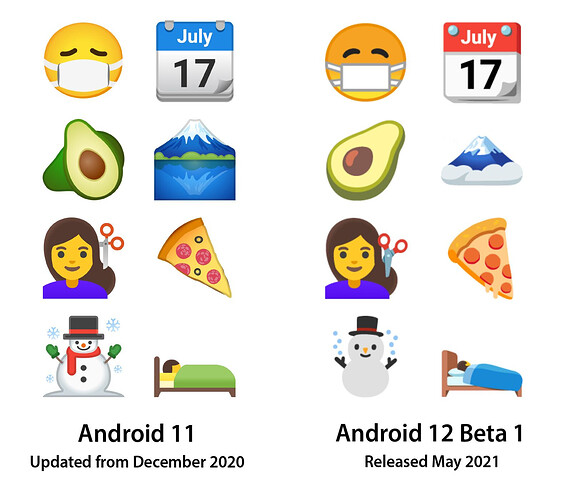 Compared to the current iOS emojis.

A big yes. I’m not a big fan of apple’s emojis, but I really enjoy Microsoft’s. This could be a great option !

Isn’t the emoji just another unicode character that is rendered by the host OS? So an emoji on a page in Anytype looks different depending on the device you use to open that page?

Isn’t the emoji just another unicode character that is rendered by the host OS? So an emoji on a page in Anytype looks different depending on the device you use to open that page?

All emoji used for page icons or via the Emoji popup selector (CTRL + E) are rendered in iOS style. Regarding actual emoji characters (e.g. added via mobile emoji selector), yes.

Thanks for clarifying that difference! I would love this to be configurable.

Edit: if both would be technically possible, would you prefer a picker that allows you to choose, or a system wide setting to determine what emojis you can select and how emojis are rendered for you?

Not really a comment on OP, just a small rant:

I hate how there are different “versions” for emoji… To me this goes against their very purpose - to communicate. Most of the time emoji are similar enough across sets that this isn’t a problem, but often they are very different, with completely different meanings. For example, I remember I used to send

to mean “oh well”, because in the device I had at the time the face wasn’t smiling. Later that emoji got a smile in some devices. So I was sending “oh well” but the person on the other side got a “playful smile”.

PS: in this link the LG version is what I mean (though this isn’t the actual version I remember using)
😛 Face with Tongue emoji Meaning | Dictionary.com.