Is your feature request related to a problem? Please describe.
I don’t know if this has been posted yet, I couldn’t find it here or in reddit.
The current logo looks like something from google, the shapes and the colors are identical.

Describe the solution you’d like
I think it would be nice to have other colors, something along the lines of the anytype.io page, maybe with gradients or b&w. The shape looks good in my opinion.

Maybe this was intentional, or maybe this logo is something temporal. It’s just something that came to my mind when I first opened the app.

I just realized that Anytype’s logo is small letter “a”. It makes more sense now XD

I also wanted a change for anytype’s logo design.

The system’s profile pic makes it easy to see “oh, it’s an a”,
but its gradient color does not help it stand out from its own white background.

Though a more contrasting or neon gradient color might help.
One example is Programming Hero’s logo.

It is still a gradient design, and it can stand out in white background. Easier to see

I didn’t realized that, thanks for pointing it out, I thought it was some kind of arrow.

Maybe if there wasn’t a gap between the circle and the right rectangle, it would look more like an “a”

As a Graphic Designer I think I can bring a useful opinion.

The design of the logo is in my opinion very successful and the fact that few people notice at first glance that it forms the letter “a” may seem counterintuitive and paradoxical for most people, but it is actually a good thing.

However, about the recent use of the gradient in the logo I must admit is a great disservice to it. A black logo would have been undeniably better.

If you still want to use color you might as well reflect the diversity of objects with different colors (as before), but in a way that does not limit them in their own diversity.
For example, by integrating different sets of colors within a motion design. While ending the animation on a timeless logo in B&W.

Hope this could help.

Thanks for affirming that it’s actually a good thing.
Having understood the letter and the color choices connects, and adds meaning now.

I still can’t deny OP’s post that it looks like Google or google-associated app, so I am open for Anytype logo change if any. Especially since Anytype claim to be the next-gen software. I just wanted something a little more grandiose. or unique. (easy for me to say :’))

But to say unique is a little silly, since it is only when you group anytype with other Google apps that make it less unique/more holistic or associated. And I don’t think most people will try to put Anytype in the same box like this: 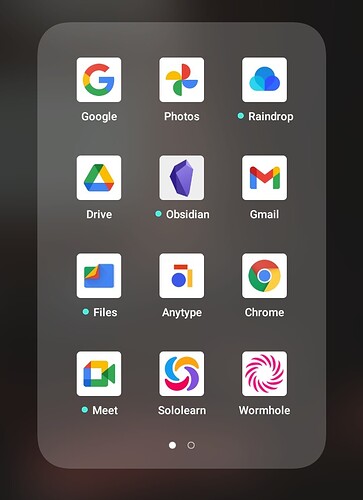 These apps are not associated, but their icon/“vibe” reminds me they are just another app when I clearly know that they aren’t.

I suspect the logo will be changing anyway, at least in colors, since branding changed decently (see: look of this forum, the new website, etc.). Look in the header on the left

when you scroll down in a topic…

@WhereisJ9 Nice job of putting the logo in context, indeed as you said, the old version lacks singularity, but it’s just a matter of color choice.

Those logo “vibes” as you said come from a trend that many graphic designers have fallen into. Unfortunately logos in solid form are becoming scarce, this is where the shape of Anytype’s logo has some boldness.

I was talking about the new logo that @Oshyan mentioned as well. In a design perspective this pinkish gradient for colors is not a good choice, it’s a trendy one and this is generally to avoid, especially for a brand that seek professionalism.
Not to mention that this particular gradient looks disgraceful from my perspective and a little to “girly” for a brand that stands on Any type. That’s unfortunate.

This is by no means an official statement, just speculation on my part. But perhaps we can consider the branding itself to also be experimental, part of the alpha process. If ever there was a time to try out different aesthetics, it is during pre-release!

If ever there was a time to try out different aesthetics, it is during pre-release!

Can we consider this request to be solved?