Anytype takes up too much space on Android

I’ve copied over notes to test on the android version of anytype. These notes (not even 100) are largely text together with bookmarked links and markdown linked images (no uploaded images or files) and it’s taking up about a gigabyte of space on my android (minus cache) while only using about 360mb on my windows hard drive.

I’ve also noticed that if I log out and log back in, the space taken by the notes in my android phone comes to about the same as my desktop but on adding notes, the space taken shoots up so much it’s alarming.

It’s a real issue. But I believe it’s been said somewhere that the team will take care of optimizing it in some later stage of development.

Thank you for writing such a comprehensive report!

When you add some data into Anytype it actually gets stored into the app and IPFS (our distributed file system). If you see a real image means it is stored as an image, if you see a link to the image then you have a text formatted with a URL. We have no embedding right now because this approach has security problems (exposing IP to remote server aka company). I think that we will add embeds anyway, but need to figure out how to do that safely.

>… while only using about 360mb on my windows hard drive. I’ve also noticed that if I log out and log back in, the space taken by the notes in my android phone comes to about the same as my desktop but on adding notes, the space taken shoots up so much it’s alarming.

Can it be possible that you opened the page with the video on it while navigated in app?

@Kirill_Lem can you please check it on your device?

@vova_ermolaev like I said, I haven’t stored any videos or files other than photos (from web urls) so that can’t be the case.

@vova_ermolaev I can’t reproduce this. @Mukanzi I have added it in our bug tracker, thank you for your report! We will investigate why it happens.

I had the same issue with storage usage going up to 2 GB on Android, but only a few hundred MBs on Windows. After wiping the data on Android and syncing everything again it went down to 200 MB.

My notes are mostly text blocks with almost no images and no videos or files. I made some text changes on Windows and the disk usage on Android already doubled again within a few days (by adding just a few hundred words).

I spent some time trying to reproduce this and was able to get into a state, where the used space keeps increasing multiple megabytes per minute after making only small changes.

Unfortunately it does not seem to work everytime, but this is what I kept trying:

Note: The used space does not seem to increase immediately, but starts going up after some minutes with a rate about 2-3 MBs per minute and only stops when restarting the app. Sometimes it even jumps 20 or 30 MB at once, without any interaction.

@felix thank you for such a comprehensive report! We will go through your guide and try to reproduce that behavior one more time. We will write here about the results after the research

@vova_ermolaev I think that we will add embeds anyway, but need to figure out how to do that safely.

I think a good thing would be a toggle to choose whether to use the device (exposing the IP) or using the backup server as a proxy for getting the info (looking at you, Telegram

On windows it’s consuming close to 7 GB and on android close to 6gb.

In contrast, the work directory in the desktop is 4 GB large, and I’ve had that installation for about five months. The Android app was only installed for less than two months before the storage ballooned to nearly 9 GB.

This makes me suspect that this is a bug within the Anytype Android application, as this issue doesn’t occur on the Desktop application. I’d be happy to provide bug or sync logs to help the developers resolve this issue.

Apart from the consistent rate of increase when making no changes at all, objects themselves take quite a bit of storage space:

I’ve done some tests and it seems that every object upon creation takes 1-2mb, which feels like a lot for just a bit of text (and some metadata). Based on my (non-scientific) tests it seems mostly the number of objects and (large) media within objects that make the app size grow rapidly.

Anytype is consuming more disk space for less number of notes. I hardly have 12 notes which include some text, images and code blocks . No videos are present . I didn’t even import any notes from notion.

Use less disk space in both devices 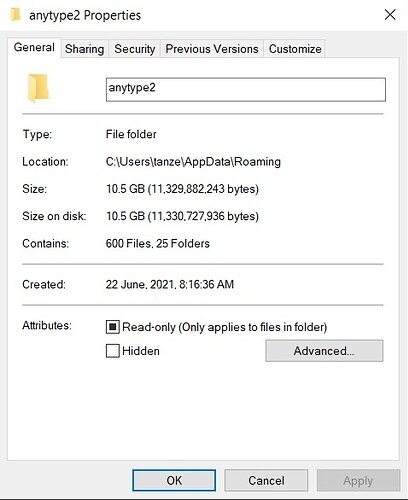 might be because it keeps all the history of a page saved ?

@Inkqb Yeah could be, maybe they made some optimizations in the coming update, I will report usage after that !

@Tanzeel098 It’s the known issue and we haven’t resolved it yet.

Today I saw that Anytype still takes up way to much storage space, both on Windows and Android. Any update on optimizing or the reason why?

I have about 500 pages, mostly empty for testing Anytype. A few sets and relations to connect them all together and some images for covers (average image size 200kb) and 2 PDF’s. All together should not be taking up more then 100MB and that’s a large estimation on my part.

For comparison, my Obsidian vault, containing at least double the amount of pages, but to be fair less images and takes up only 35MB of space!