Ability to save user-created formatting presets

With the high degree of formatting flexibility in Anytype (and potentially further increase over time, e.g. https://community.anytype.io/t/-/1343), it would be great to be able to create our own “presets” for combinations of formatting. With the existing options this would allow for mimicking some of the unique block styles of many other systems, but with even greater flexibility.

A simple example is the ClickUp’s “banner” blocks in its Docs feature. These are really just the combination of a left line with a particular color (like Anytype’s current “highlight” block), and a background color. ClickUp lacks the ability to set background color for the entire block, so it has to have these special (and limited) formatting presets. You can combine them with text background color, but you can’t change the block background color. Anytype is already more flexible since you do have separate block background color, which is great. But the idea of these commonly used sets of styles that ClickUp has created is a good one, even if they are less flexible than Anytype. 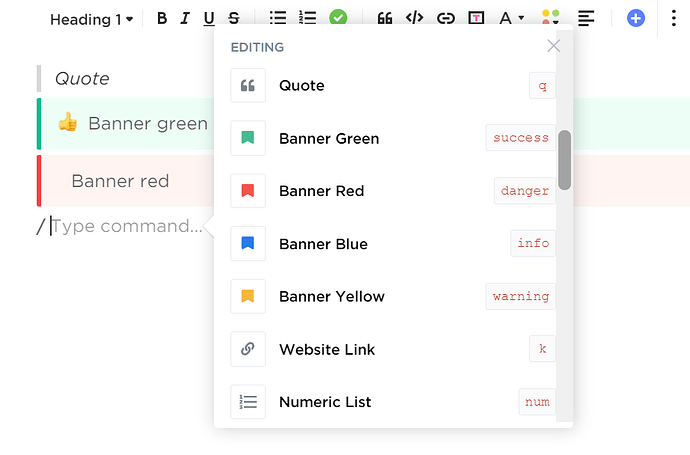 Note that the “Banner” style in ClickUp does include an icon, like Notion’s “Callout”. Refer to my other feature request for some thoughts on that:

So again, since there are so many formatting options in Anytype, and clearly as demonstrated in other systems there is value in having some common configurations for e.g. maintaining some formatting consistency (you see a red line with a red background and you always know it’s “important” in your docs), Anytype could jump ahead of other systems by allowing saving of user-created formatting presets. These could just go in another part of the Block pop-up menu, maybe a sub-menu like “text style”, i.e. “Format presets”, where they all show up. You’d want to be able to give them custom names, of course. Automatic previews of their effects would be a bonus, but not expected.

I see how this differs from Templates (which are whole-page), and this block-level approach sounds like it would be great as part of the Plugins system.

@Narvey Yes, I see “templates” as generally being composed of groups of blocks and optional formatting. It seems like both would be valuable. I’m very curious to see how the plugin ecosystem comes together!